We're off on vacation to Europe until May 3rd! I'm going to miss her face! 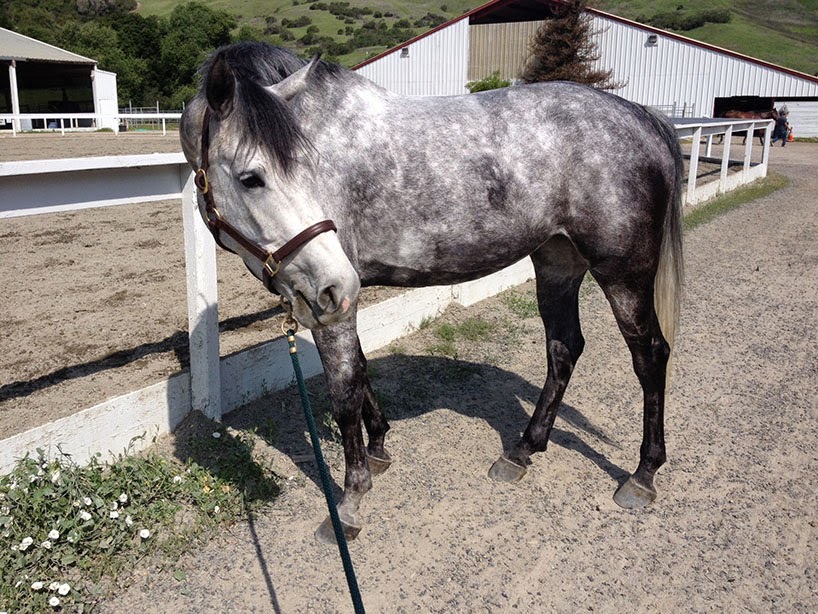 Our juniors tend to skew a little more traditional in attire- both for themselves and their horses. I have seen some pretty wild things at other barns- zebra polos, leopard saddle pads, and hot pink stirrups- often all being used at the same time.

I did spot Kaitlyn and Fire in matching outfits in our Sunday lesson! So cute!
How do the kids at your barns show their personality? I rode Friday afternoon in a little flat private with Emma. She's been working with Ellie all week and I swear she has the magic touch. After a quick trot we moved into the dreaded canter. Emma had us figure eight with a simple trot lead change. Despite picking up her left lead instead of her right in the first go around- she quickly came back to a trot and moved into the right lead. After that- smooth sailing! No ear pinning at all- happy as a clam. After a couple of successful eights I suggested that we be done. Emma pushed us a bit and had us do the final exercise with simple change from a walk.  It was beautiful. So we quit for the day.

On to our little Sunday private with Alison- sure enough we were just as successful in getting that right lead! We hopped over a few crossrails but she was starting to get crabby so we kept the program light and ended on a good note!
Happy to see the progress and proud of Ellie!

It's been really relaxing to slowly unpack this week and swing by to give Ells a good graze here and there. With Kelly at a show Emma has been giving her the training rides and has said she's just been fantastic! It's always nice to hear that the trainers really enjoy riding your horse. 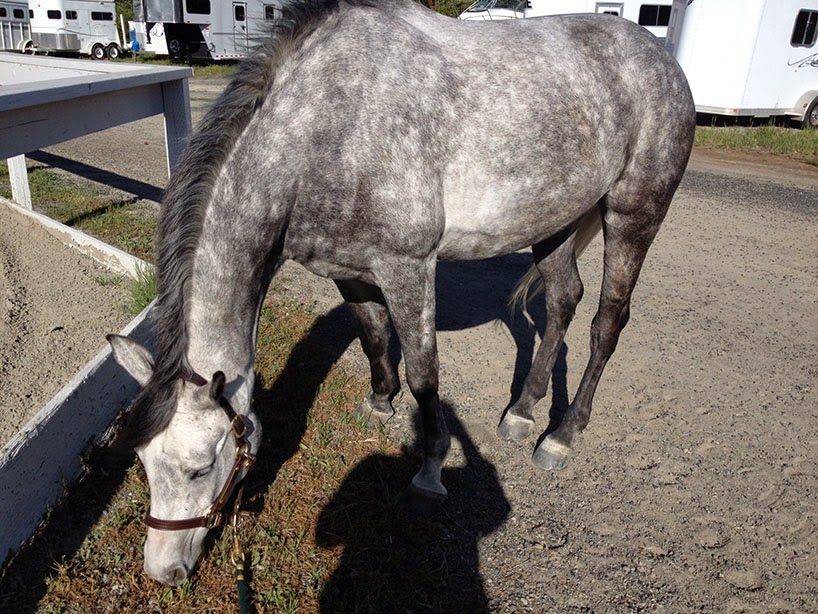 More photos from the show this weekend! From our flat classes!
She looks like quite the little devil in her right lead photo- evil!
As I was going through the Google Album Paul put together I came across a throwback- Luke and I showing at Foxton Farms in Indiana back in 2009. Such a sweet guy! 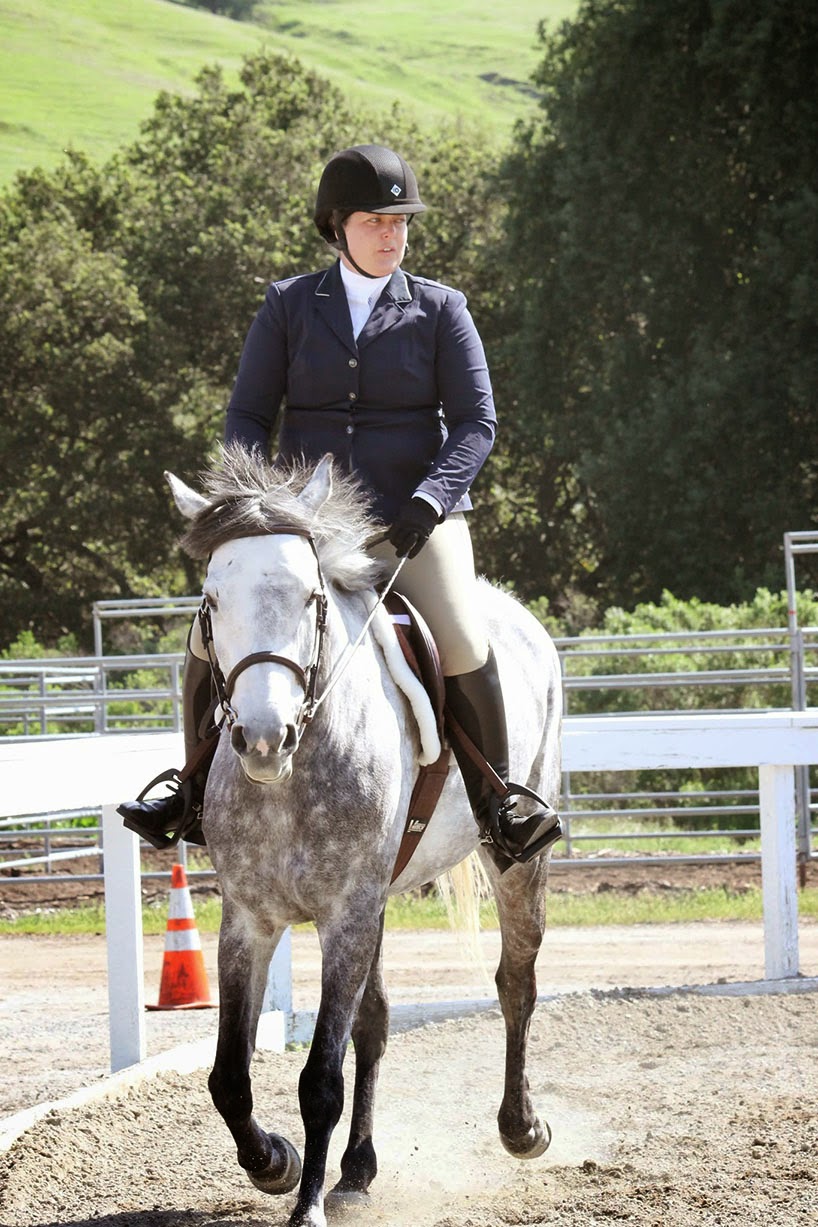 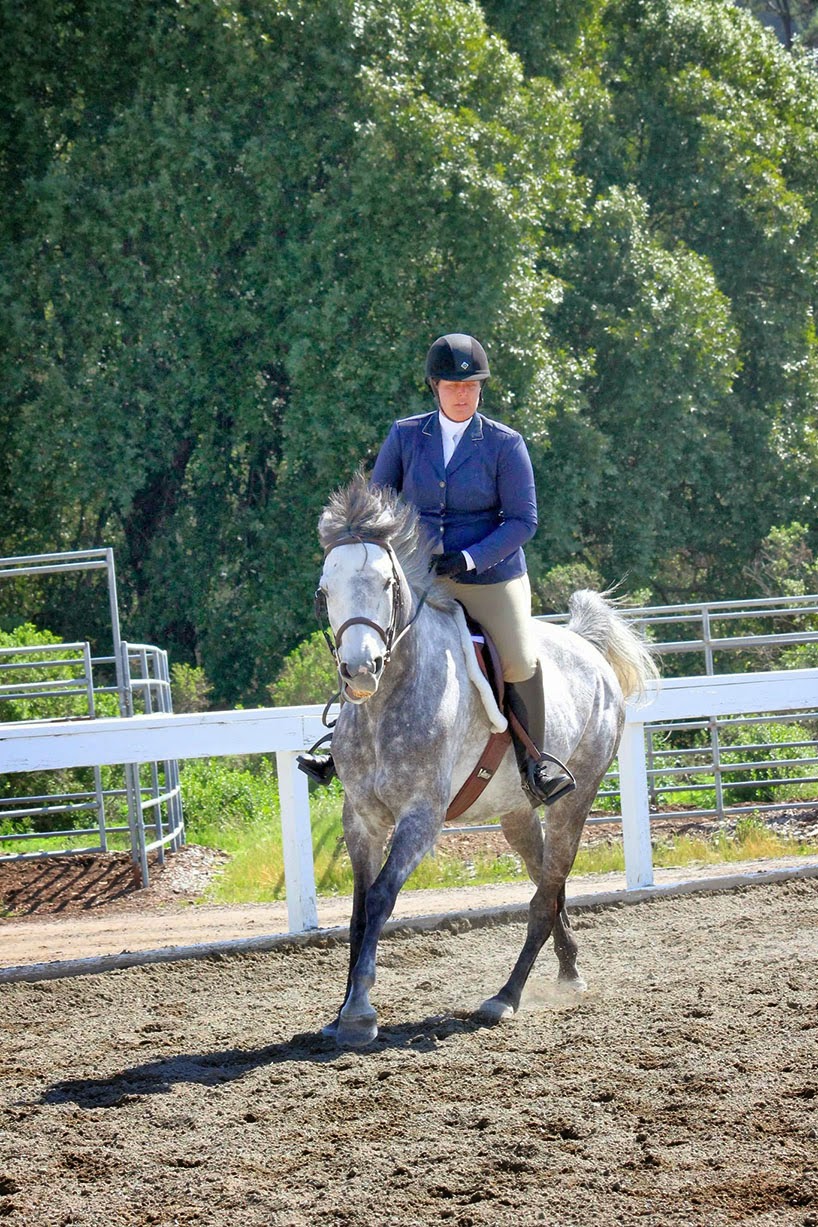 I had to laugh a little when my Dad sent a link to a WSJ article about Barn Drama. My coworker's father had sent her the same thing just a few hours earlier which she had shared with the team. Oh Dads.
If you haven't seen it- do read- it's a hoot!

Ellie grazed for a bit last night and then I came home to tackle the final project of the closet unpacking: Boots. I needed two glasses of wine and the second bedroom closet to make them feel remotely organized. 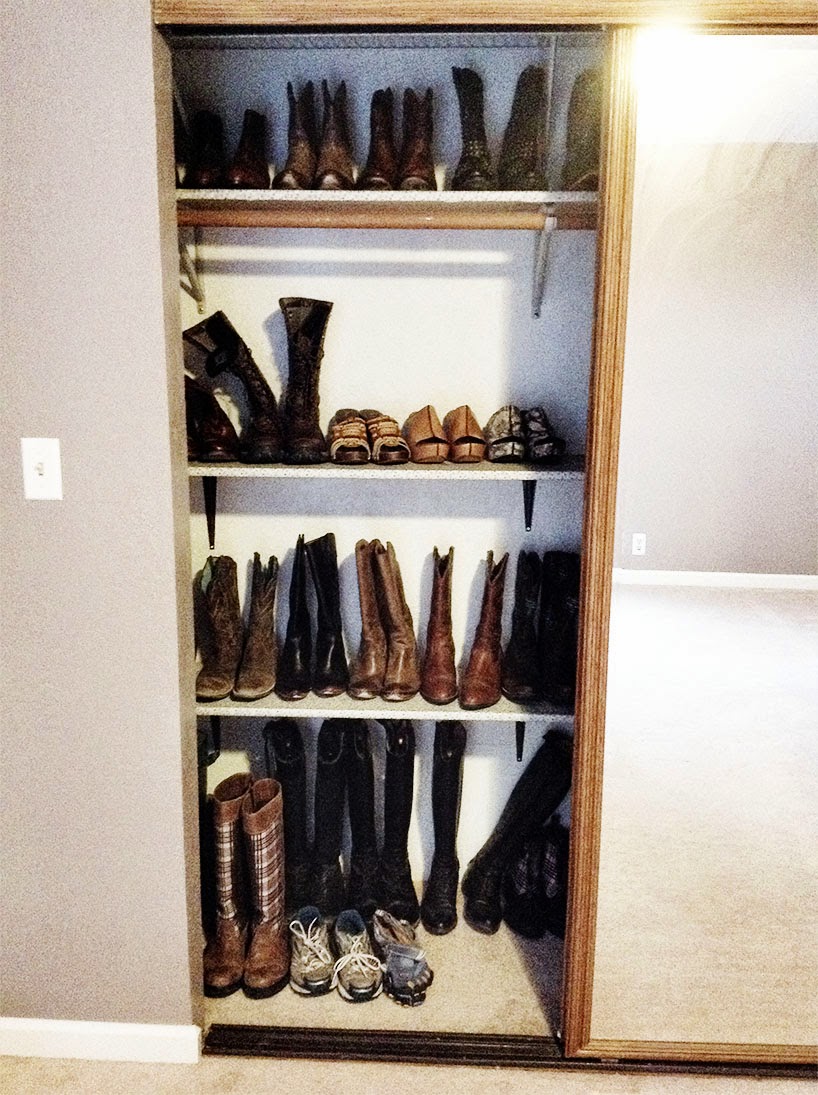 Little Ellie's new halter from Smartpak came yesterday and I couldn't wait to swing out to the barn to try it on. SP was doing one of their % off sales and it was time that Ellie got her own headgear- the Wilbur plate was confusing the new grooms.
It's a little snug. BUT I checked my SP account this morning and it's the same size and leather as the Wilbur halter which fits her perfectly. So I sent a note to the trainer asking her to keep an eye out for rubs and we'll cross our fingers for some quick stretch! Look at those lashes! 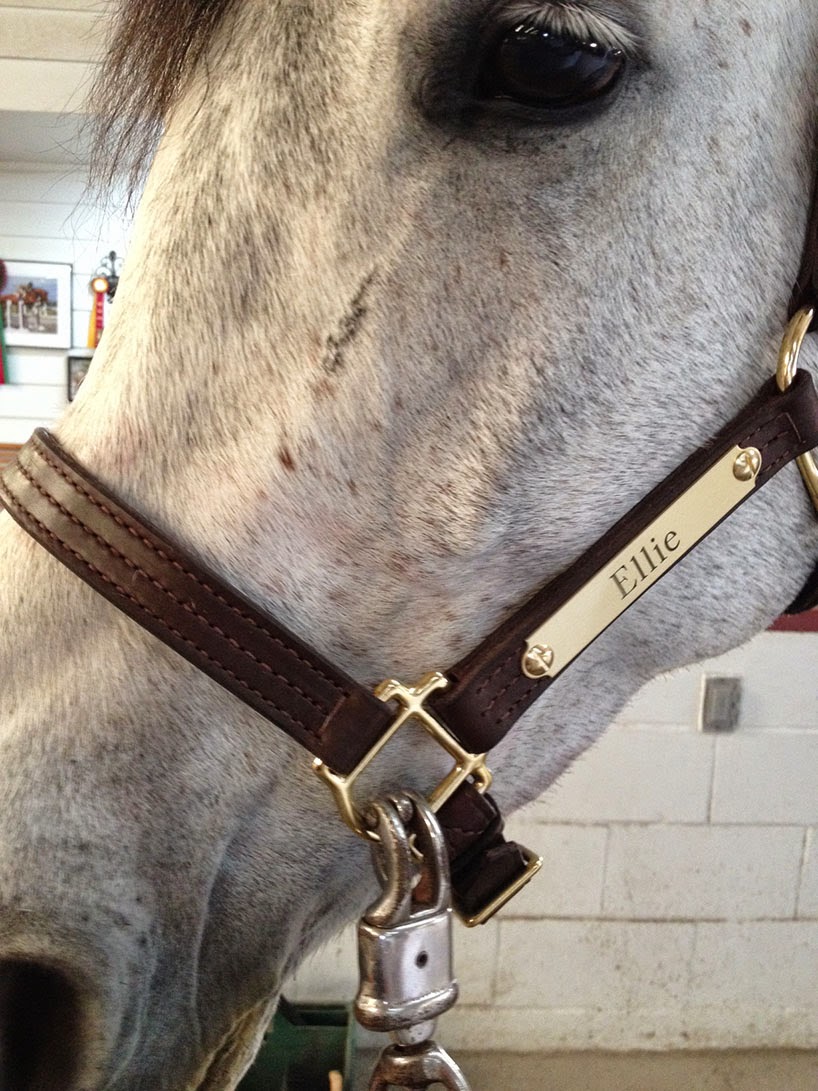 Ellie and I managed to make her show debut between packing and moving. And unpacking. Oh the unpacking.
KMT hosted their first show of the year at home which makes attending a no brainer!

We showed in the crossrail division which consisted of two back to back flat classes (Hunter & Eq) and three crossrail courses (Hunter, Eq, Medal).

With our right lead debacles I was much more nervous for our flat. I had the chance to see Emma schooling Ellie in the morning and she was able to get plenty of right leads. And actually I've figured out where I was going wrong- letting my right leg slide back and push her haunch rather than keeping it at the girth to push her shoulder.
Rather than fight with her in the schooling ring I decided to give my theory a whirl in the show ring and use those flat classes as warm ups.

Despite my new found knowledge we managed to canter past the judge twice on the left lead (but managed to fix- in the first class with a flying change and the second class with a simple). Needless to say- with 7 in the class we didn't get any ribbons in our flatwork.

On to crossrails where she jumped around like a champ! Our first course was going smoothly until the last line- a cantering 3 which we managed to trot in and canter out of in a 3.15- after which I said "whoops" really loudly. That might had played a roll in our fourth place finish.

The last two courses were great (we toned down that line and got a nice 4) and we ended up with second in both!

Super happy with her- she did exactly as I expected her to do- be a pill on the flat but do her job around the courses!
Nice work Ellie!
Note: video of our medal at the bottom! 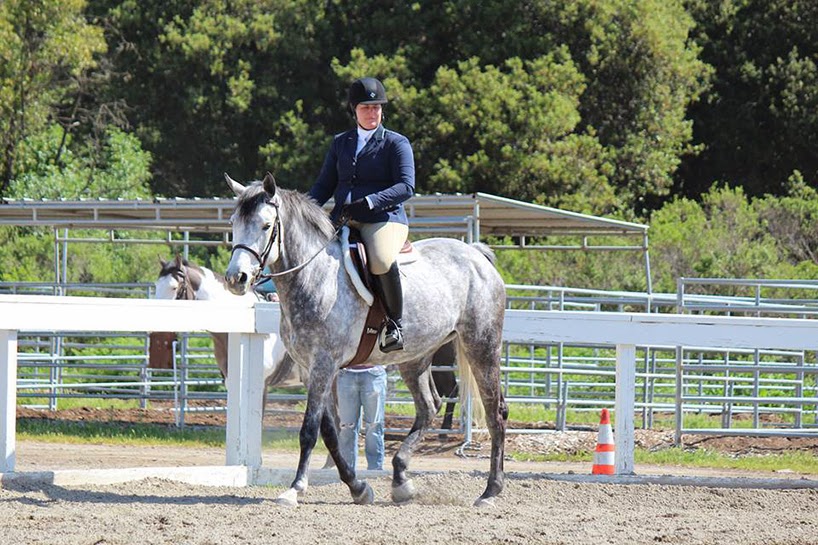 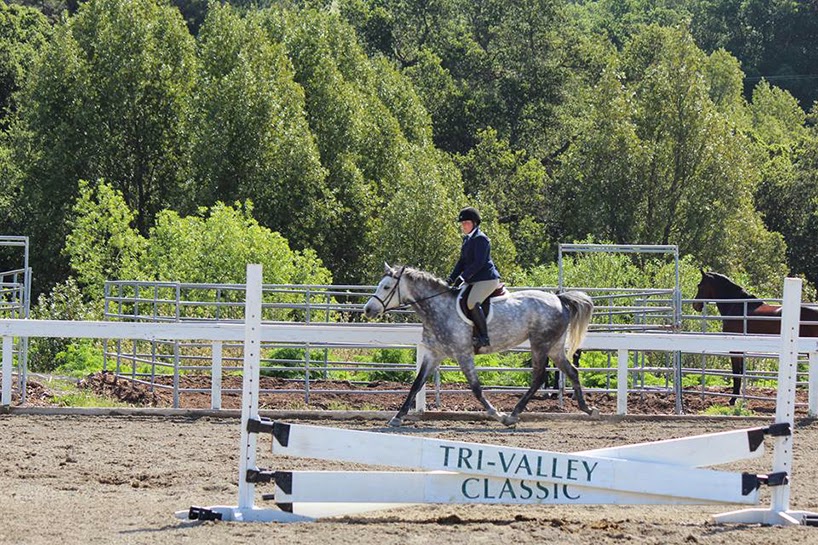 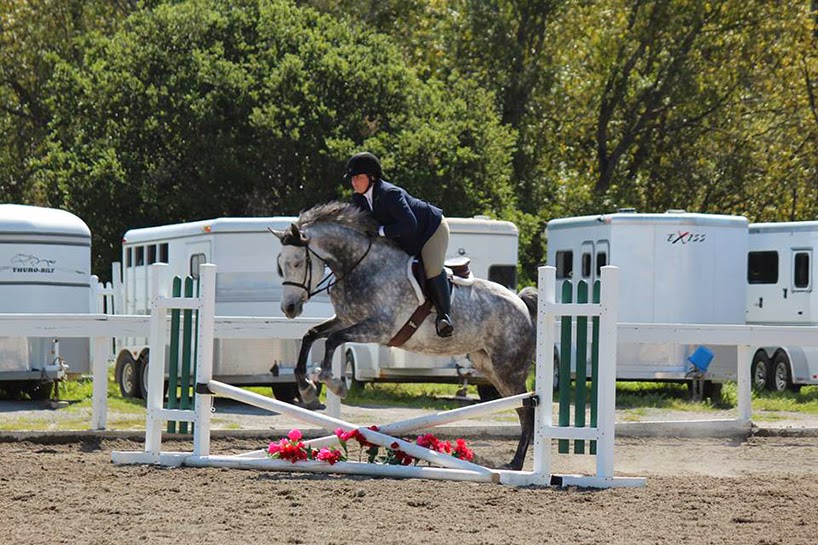 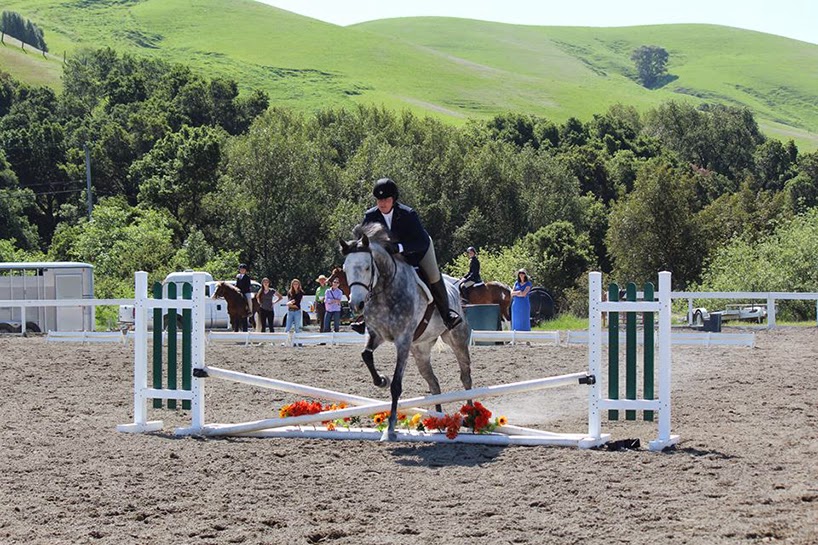 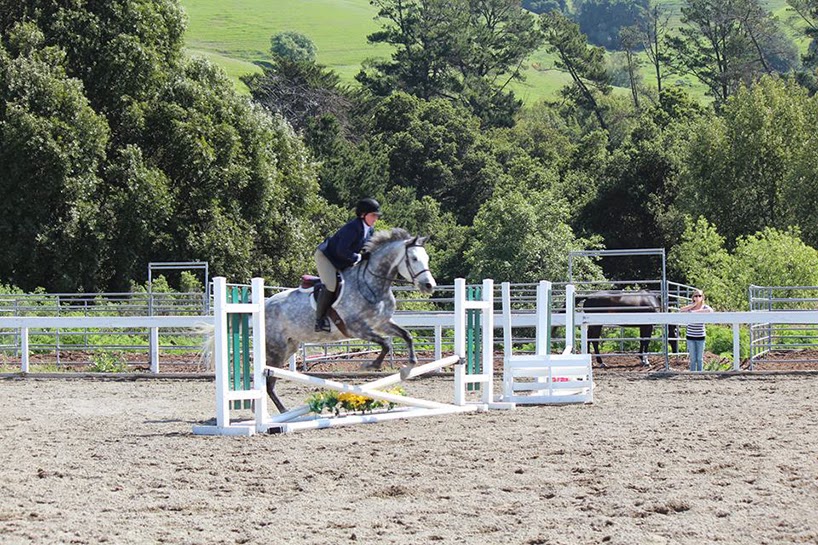 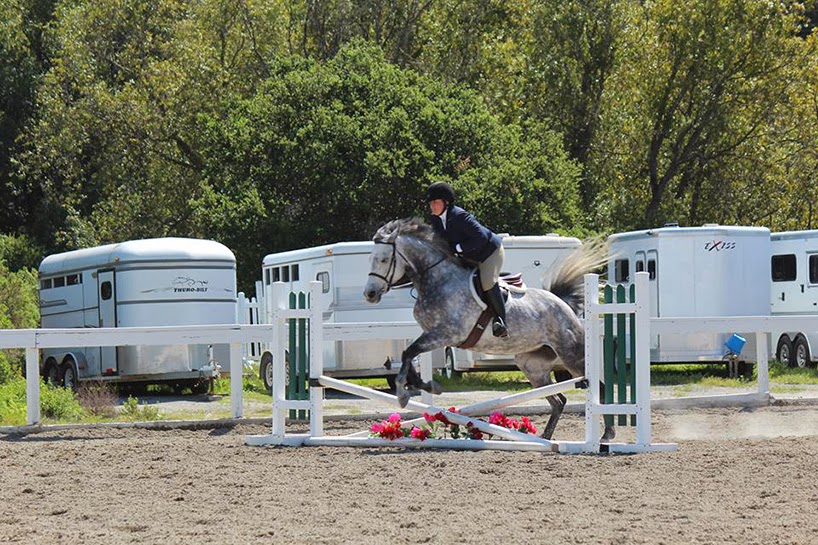 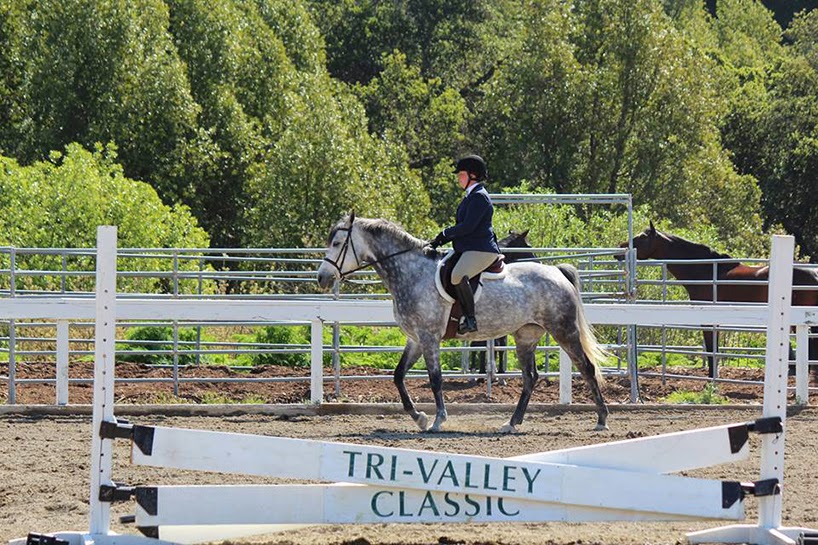 My other horse, also known as the Honda Civic, has gone 55K miles without needing a lick of maintenance outside of an oil change.

So I couldn't really complain when the breaks started to squeak and it was evident that I needed new pads. I found a mechanic with fabulous Yelp ratings really close to my office so I stopped by this morning.

It is funny that I don't even blink at writing a check for the schooling show this weekend but cringe a little as I hand over my debit card for car work. Priorities. 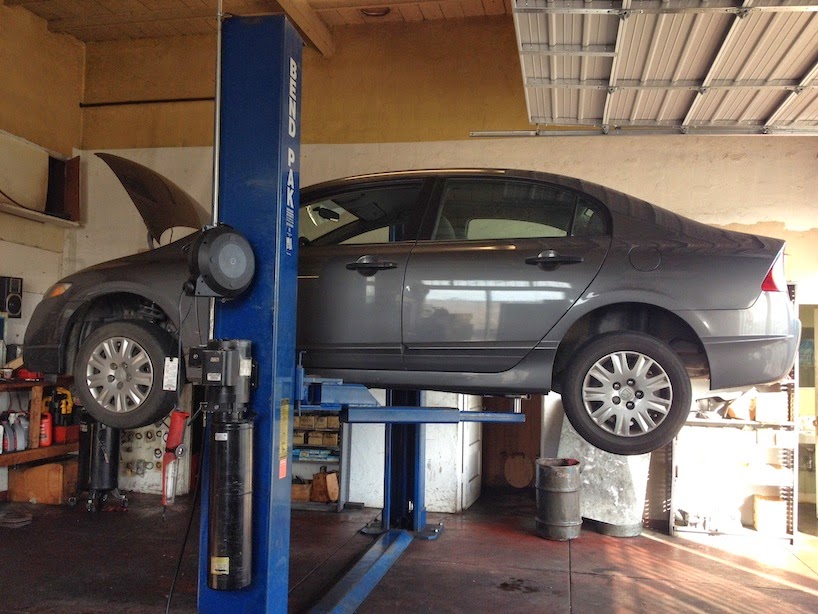 My coworker, Claire, invited Paul and I over for a dinner party on Friday night. Nicku of The Polka Dot Periodical and her husband were also invited! It was such fun to meet another blogger and hang out with two horse lovin' gals.  We chatted over wine and enjoyed the delicious dinner that Claire cooked.

Paul and I are busy moving and packing which means I am too exhausted to form sentences.....but Nicku wrote a great post called "The Real Horsewives" that summed up the evening quite well!

Labels: around the barn, miscellaneous

Our lesson today was a bit of a hot mess. Being a former endurance horse, Ellie has not had to spend much time on the right lead. So naturally, while she is very flexible to her left, the right leaves a bit to be desired. And today she did not want to pick up her right lead to save her life. Frankly, it's totally rider error. I'm just not tight enough on my flatwork to push her out to the left and ask firmly for that right lead.
After doing a bunch of circles to the right with limited success, Emma had us take a straight track down each quarterline and ask for the right lead. She picked up the left lead very nicely each time which tells me that she thinks that she's doing the correct response to my ask. I can't fault her for that!

Her response also tells me that while it's fun to pop over fences and I may be a capable enough rider to guide her into straightness in the lines and after, that the nuances of flatwork are evading me right now and she needs to get her fill of pro rides.

Luckily she's a very forgiving girl and has happy to snuggle despite having a spur in her right side all morning! Looking forward to the trails drying up! In the meantime we practice going through puddles. 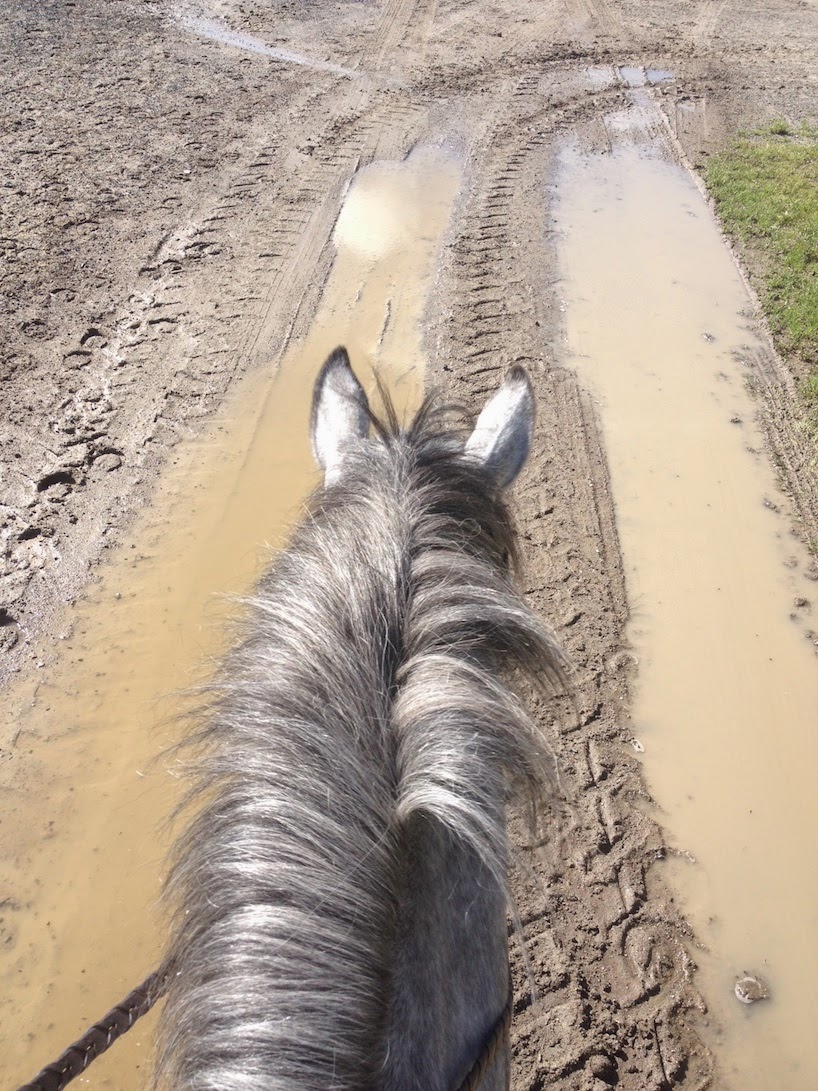 No post from yesterday because we were busy picking up the keys to our New House!!!

Tonight I caught a ride on Lexi's horse, Jinx. Who I call Jinxy Cat from Meet the Fockers. Lexi is a freelance writer but currently has a full time gig in the city so she can't get out as much during the week. She kindly asked if I wanted to hack him tonight and of course I said yes! Time in the saddle is my friend right now.

Despite sometimes having a bit of a crabby attitude in the crossties he's this little energizer bunny that will trot forever. Great for getting a lot of posting in!

Super excited for my 8am private lesson with Ellie tomorrow! 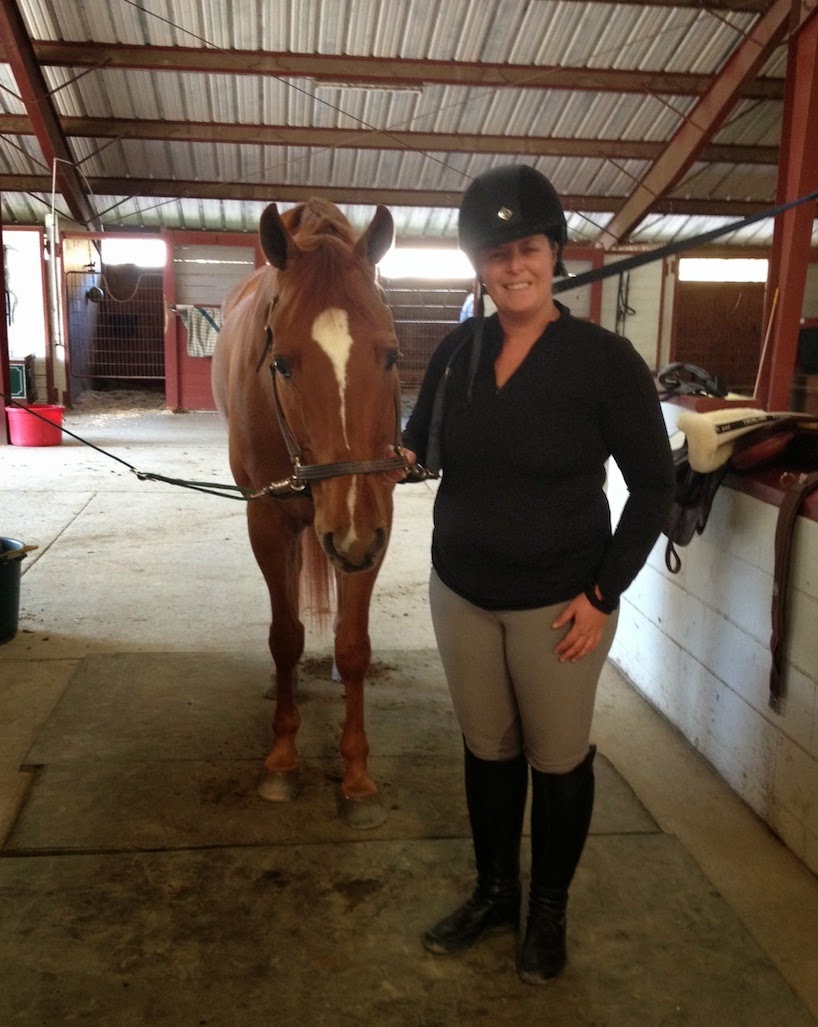 Blog Hop: Junk in the Trunk

I had recently cleaned out my trunk(s) and found a dead fly in the bottom of one! Gross! Participating in a Junk in the Trunk blog hop hosted by Viva Carlos was the perfect opportunity to document while everything is still relatively organized......
Who am I kidding? Type "A" personality here. Everything has its spot. 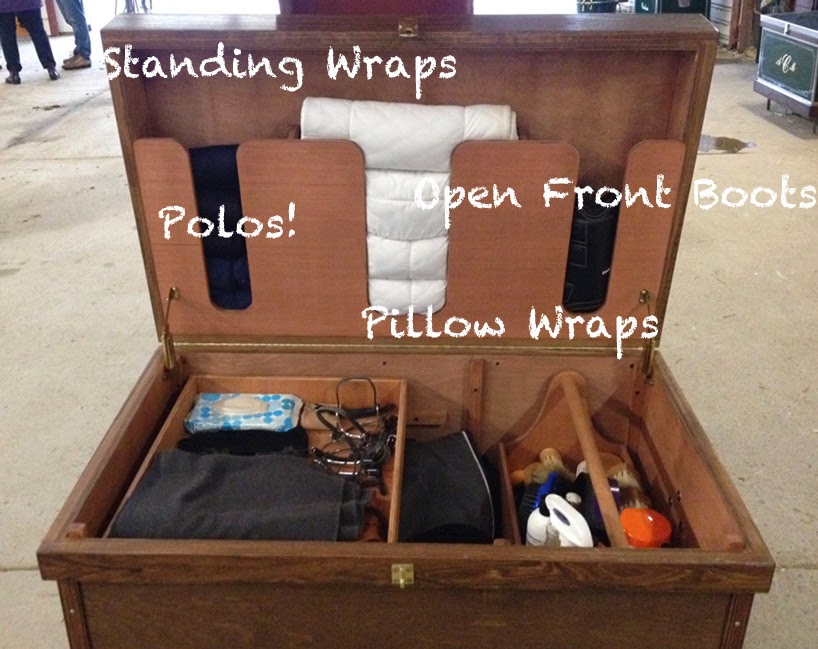 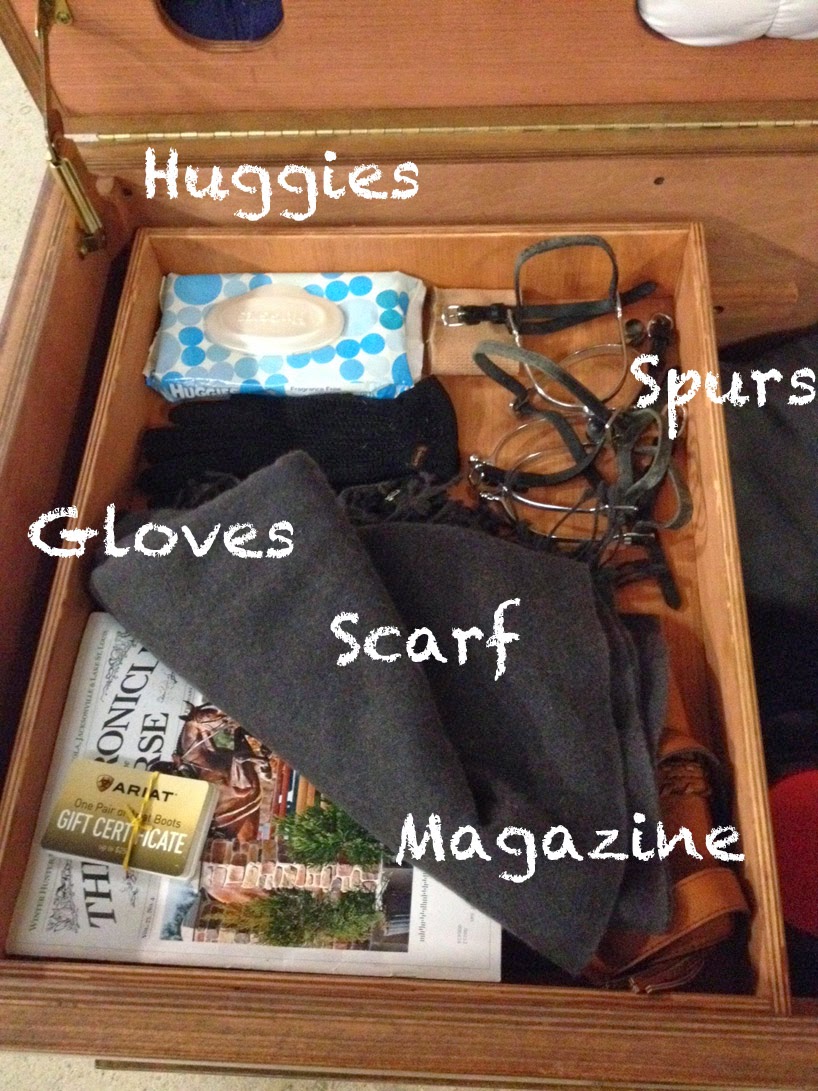 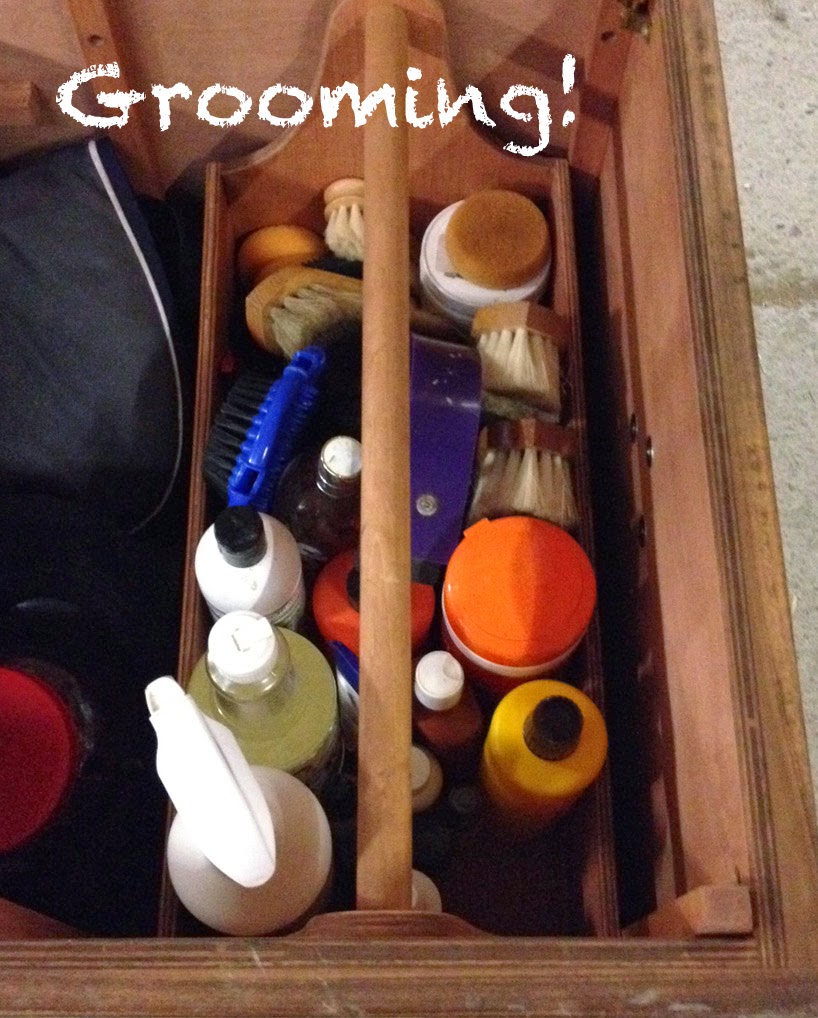 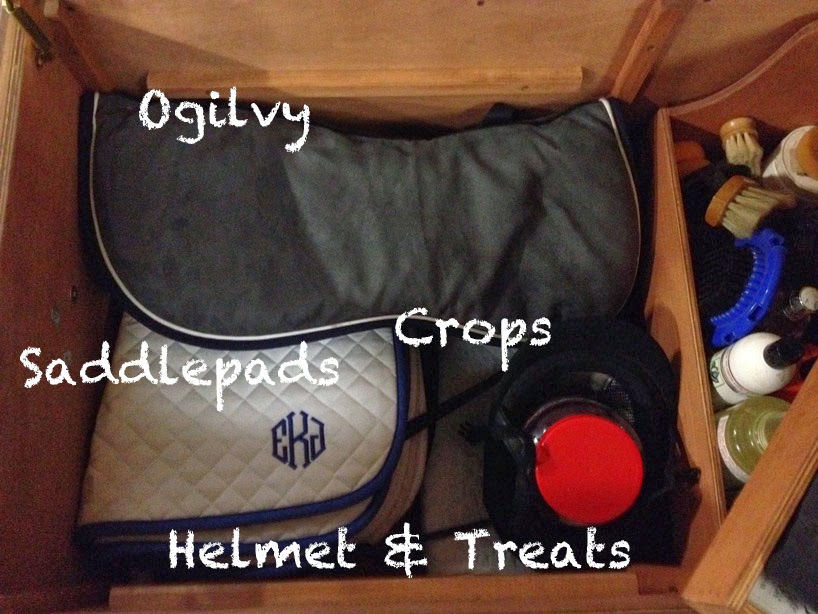 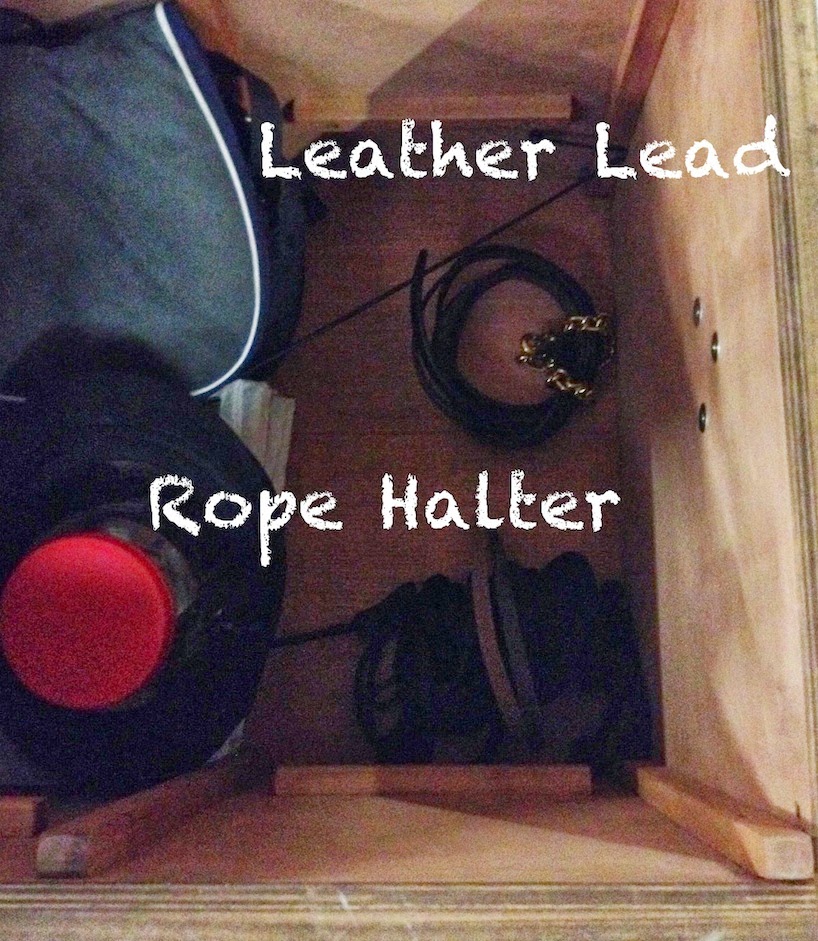 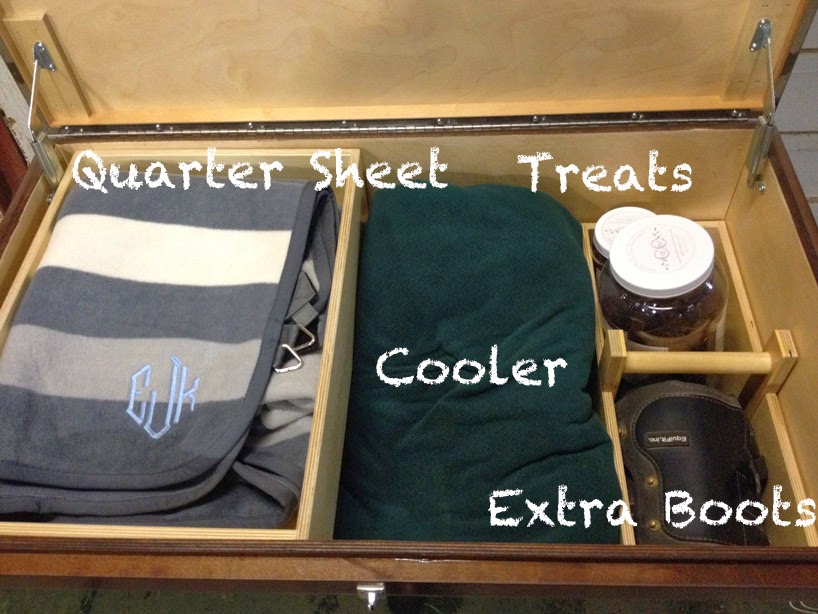 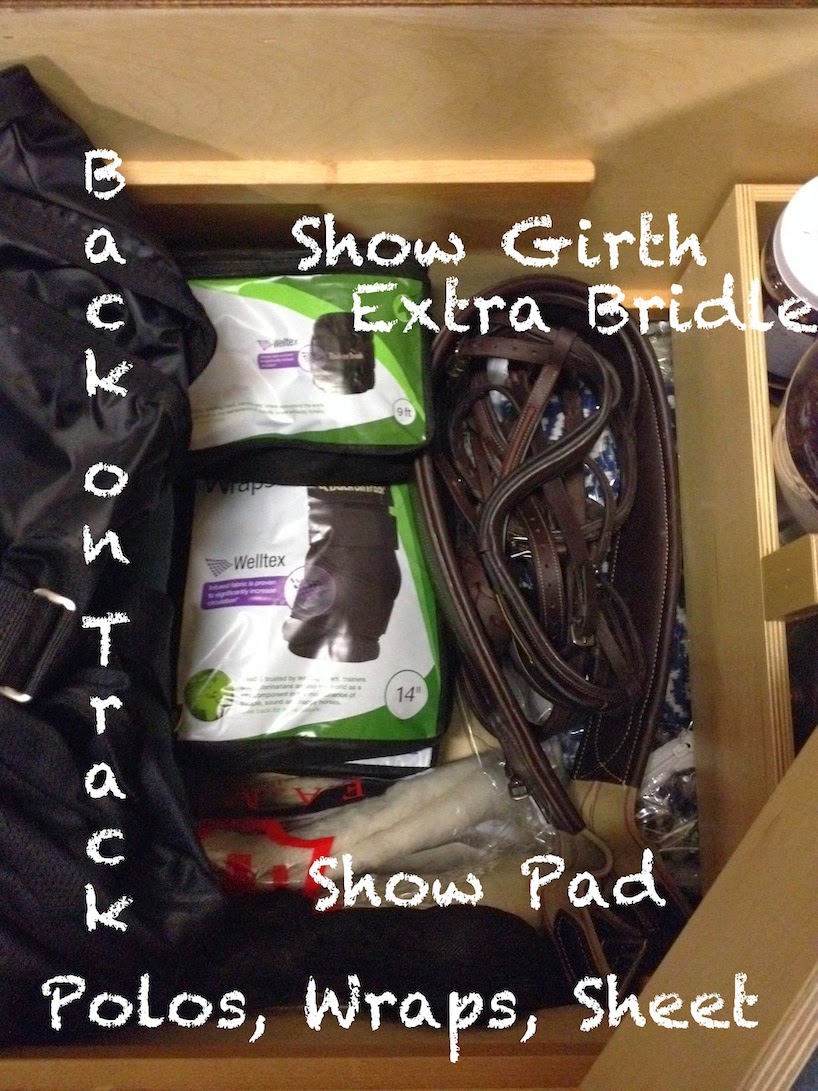