It was so quiet at the barn tonight. I left the office at 4 and was on Ellie by 5:15. The last of the juniors was wrapping up and I warmed Ellie up a bit in the meantime. We jumped- but rather than focusing there I had some amazing flatwork out of her- collected, balanced, energy- she felt awesome!
And hot. After a long week it was time to have a little fun! 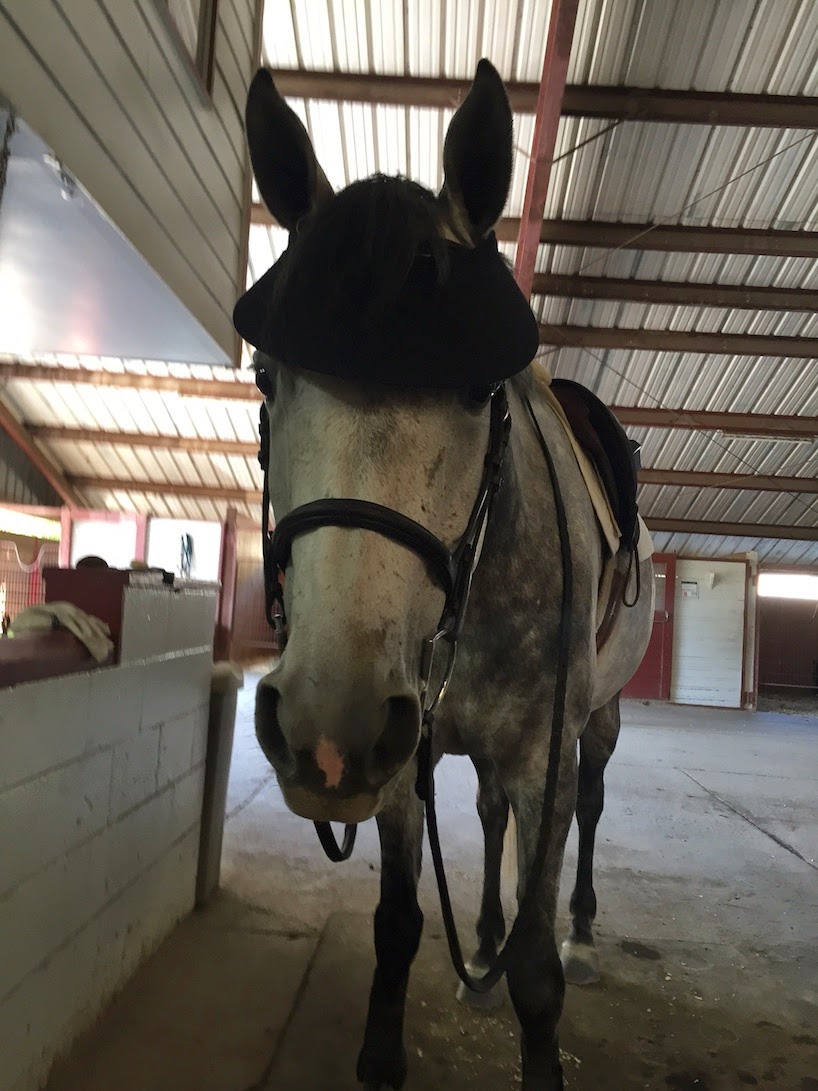 It's not often I might say "Monday Funday" but I had a few giveaways to pass out at the barn which is always treat!
Outside of that it's been spreadsheets, spreadsheet, and more spreadsheets! 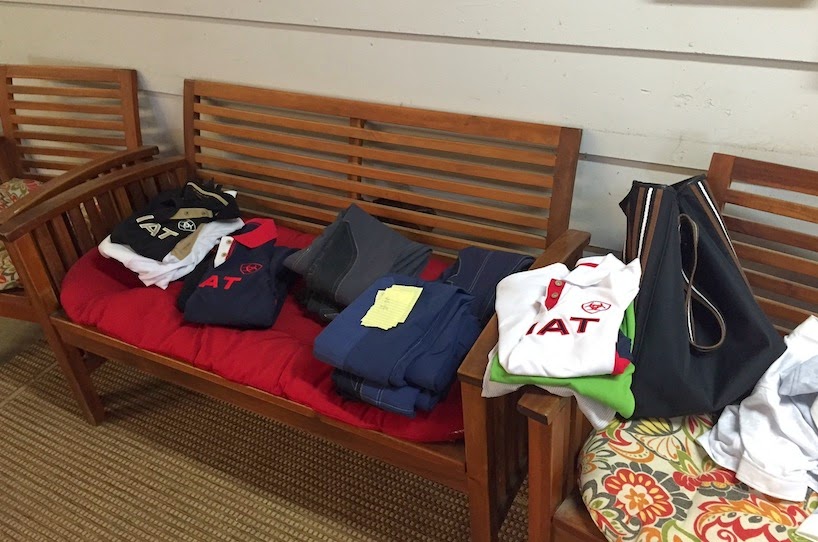 I am terrible at math- utterly and completely horrible.
I'll tell you though- I'm VERY good at retail math and some quick figuring led me to purchase my long coveted Dublin River Boots.

I don't typically fall prey to the $900 FB Pony's enabling tactics however a flash sale code on Riding Warehouse coupled with a savvy commenter on the blog took me on a trip over to RW. Not to purchase River Boots, mind you, but to do some work. That's the irony here. Emily is my name, price protection is my game.

But while I was visiting I thought I should check out the Dublins. The commenter mentioned a few select sizes in regular calf and what were the chances really? Oh- just a size 8 left in wide calf? Oh- priced at $129.95 off of a $239 MSRP? Oh- and a 15% discount? Oh- and overnight free shipping? I can't even share the final total because everyone would be just so jealous. Let's just say that I'm not sure I could have come much closer to original wholesale.

I feel as though at this juncture I should mention that Ariat has some FABULOUS Country performance boots coming out this Fall- however none in wide calf just yet- which is why I needed to act quickly to insure my feet stay dry!

What have I learned from this experience? That Riding Warehouse is super quick and accurate (once I placed my order there was no longer to ability the purchase any Wide Calf Dublin's on the product page- SO important for best customer experience) and that no one, I mean no one, is capable of turning a blind eye to an awesome sale! I may have jumped up, squealing, and fist pumped for a moment.
I did tell my husband about these boots rather than sneak them into the boot closet under the cover of darkness. How could I not? I'm actually SAVING money! 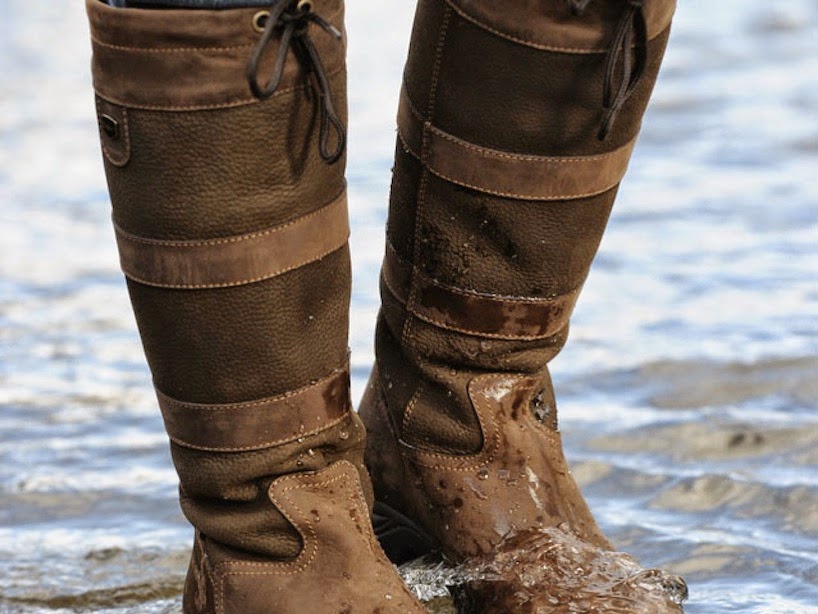 Friend Sarah's horse, Finn, had been living for the past six months up in Capay at the same facility that Wilbur lived at for about a year while he was rehabbing before moving home to Brown Ranch this last November.
Finn moved into Brown as well last week- although space in the gelding pasture is full so he is hanging out with a bunch of lady friends in the pasture next door.

We finally had a chance to celebrate his arrival in style! With mimosas of course! Sarah's Mom, Robin, and her horse, Sunshine (who is also at Brown), joined in the fun!

Happy to have another buddy at Brown Ranch!

Hop On, Hop Off

Due to said late meeting running until all hours of the evening I did not make my 6pm lesson tonight but wanted to get out while the group was still around as Ellie had a light day Sunday and her day off yesterday. Glad I did. Despite already being schooled she was still bright eyed- which as we know, means head flinging, snuffling with head flinging, circling the mounting block like a banshee, and prancing. Yes....... Prancing.

Ground manners mare.  I did manage to get on after wrangling the unicorn. For a moment. Just to say I did.
Winning!

Another fun SISTER photo as we ride into the city in an Uber! Livin' the life! In my random moments of downtime I've been teaching myself to hand embroider and not willing to go back to work after such a fun sister weekend I took a half day vacation and attended a workshop by Rebecca Ringquist at my local A Verb for Keeping Warm. I was pleasantly surprised to find myself on the right track for most of my stitches and it was great to get some hands on learning!

I don't have a particularly creative mind and am always envious of folks who are able to create awesomeness with their two hands. I've found embroidery to be easy to pick up and a very peaceful way to relax my mind. 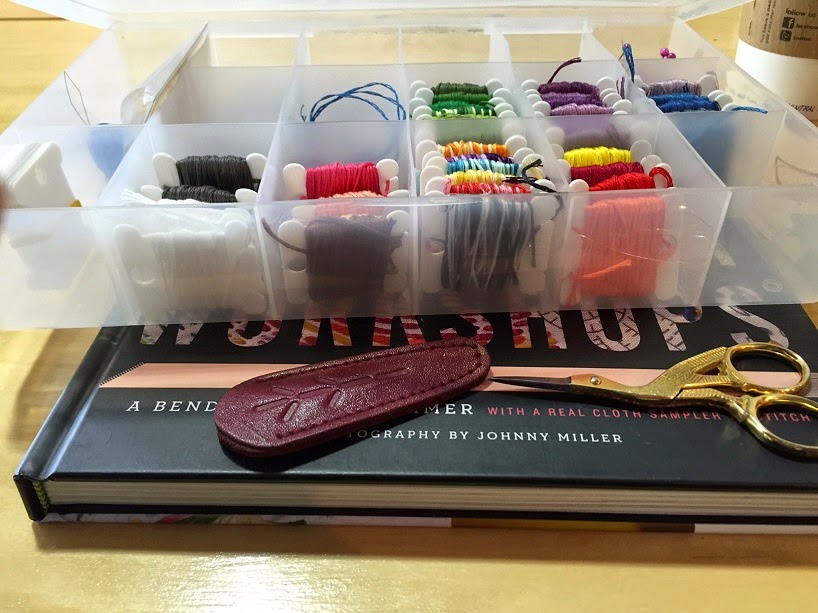 My sister, Kate, and her girlfriend, Karen, were visiting from New York City this past weekend. In true horse-person form I not only had them out to the barn but also rode for them. Because they really wanted to sit and watch me ride!

I have to give them commendations- these gals might just be the best barn visitors yet! No fear! They helped me untack, groom, and even took Ells for some grass time while I cleaned up.

Lots of hugs and peppermints!

Labels: around the barn, miscellaneous

For realz. My sister is coming from NY for a visit arriving on Thursday. My poor husband wants to offer to help clean the house....tonight- Tuesday night! Doesn't he know anything? It's bound to be filthy again by Thursday. No way. It doesn't really matter whether we vacuum tonight or not- my blood pressure will not go down until the groceries are bought, house is clean, car is clean, etc, etc, etc. All will be well by end of day tomorrow.

Can someone please rescue me from myself?

It's always fun, being a part of firsts. Tonight was Oso's very first lunge in our round pen and of course, despite a touch of trickery, he was awesome. I love being able to spend time a long, sunny Spring evening hanging out with a friend and enjoying our horses! 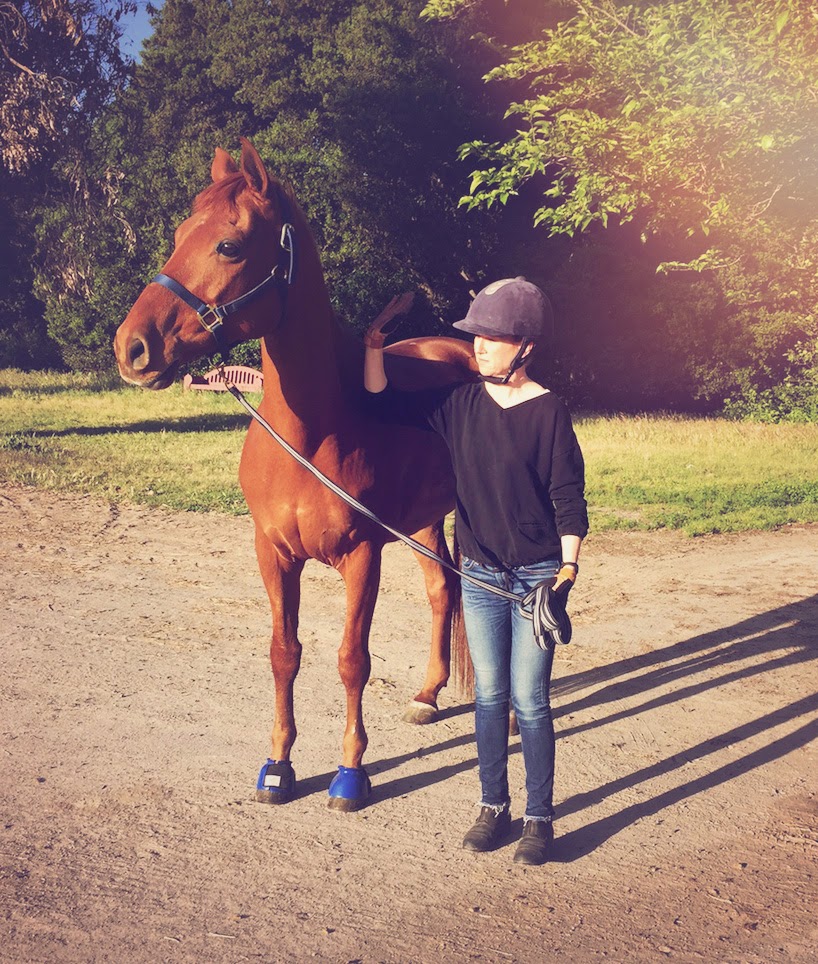 I wound embroidery floss around bobbins for the better part of the evening. Soothing to the soul and restful to the mind. 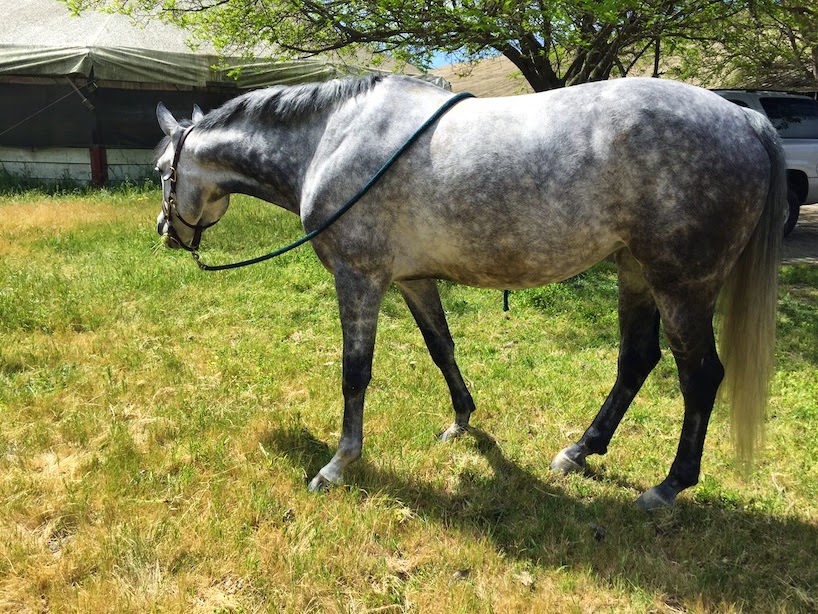 While I may not be riding this week I did have a blast at work today!

Spent the morning scoping out some new product with my work bestie fresh of a plane from PA. Purposely ambiguous snaps because the product is just. that. new. Can we just fast forward so I can have these things?

An office lunch and a movie screening complete with Scott Eastwood's bull riding (and Ariat athlete) stunt double to answer questions after the film. The Longest Ride is a must see for sure! 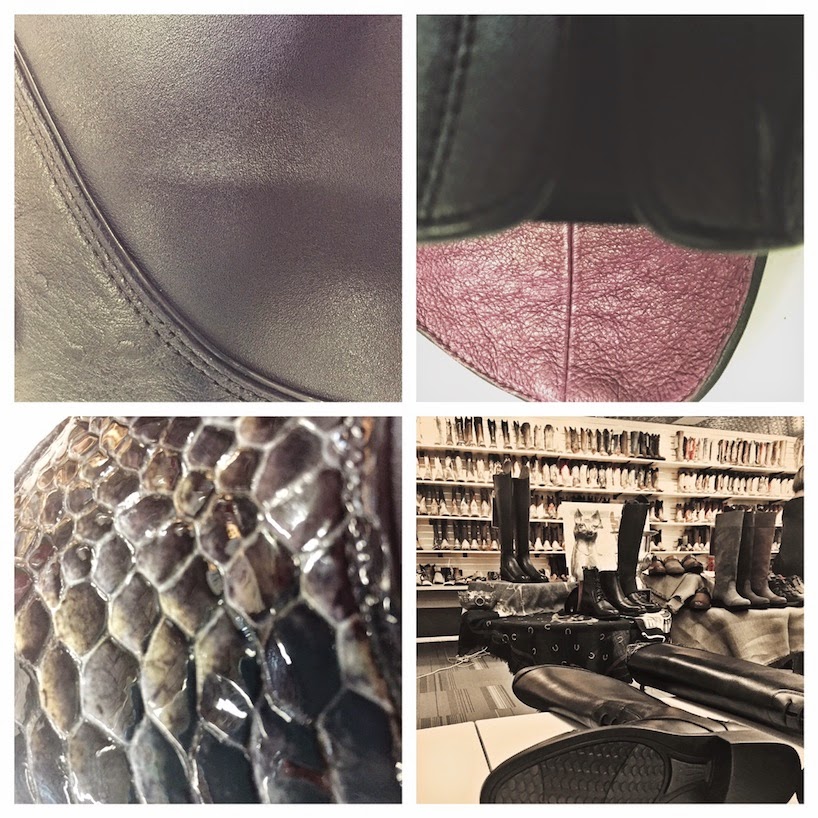 The "Old Me" Week

This week I seemed to have reverted back to the "old me"- I stopped out at the barn tonight with no intention of doing anything other than feeding a few treats and writing a check. I'm hopeful that I can squeeze in a Friday afternoon lesson because that will be my only ride during the workweek.

Tuesday was my fault. I woke up at 4:50 to a torrential downpour and promptly cancelled my 7am  lesson. I cited rain, early morning, fresh horse- all legit- but I also have a secret. I'm terrified to drive in the rain, particularly in the dark. I've been known to get off the highway and take back roads all the way home. Of course when I woke up again at 7 it was sunny and I felt a bit of shame for my wussiness.

The other "bad influence" contributing to my lack of ride time- work of course! A big two weeks with lots of meetings and fun but also some very long days. I should point out that my lovely job pays for this expensive hobby so I shouldn't be to hard on it. I love you, job.

Tomorrow our team is going to a screening of The Longest Ride (go see it!!!) and I'm hopeful to get out to the barn with enough sun left to graze Ellie and see the juniors jump around. Then on to Friday!

Sometimes I also do things with my husband

Despite battling torrential rains in various parts of my drive home (Cali micro-climates at their finest) I am actually home before 6pm tonight. The past few weeks this hasn't been the case. BUT Paul got us tix to go see.......FLEETWOOD MAC in Oakland tonight! Super excited to go to the concert and spend time with PK!
Ellie looks snazzy after our Saturday lesson in the photo below! Wilbur was a superstar for his follow up vaccination appointment last week. No fever and as furry as ever! He stood quietly for Dr. Natasha and got his five way shots for Spring! 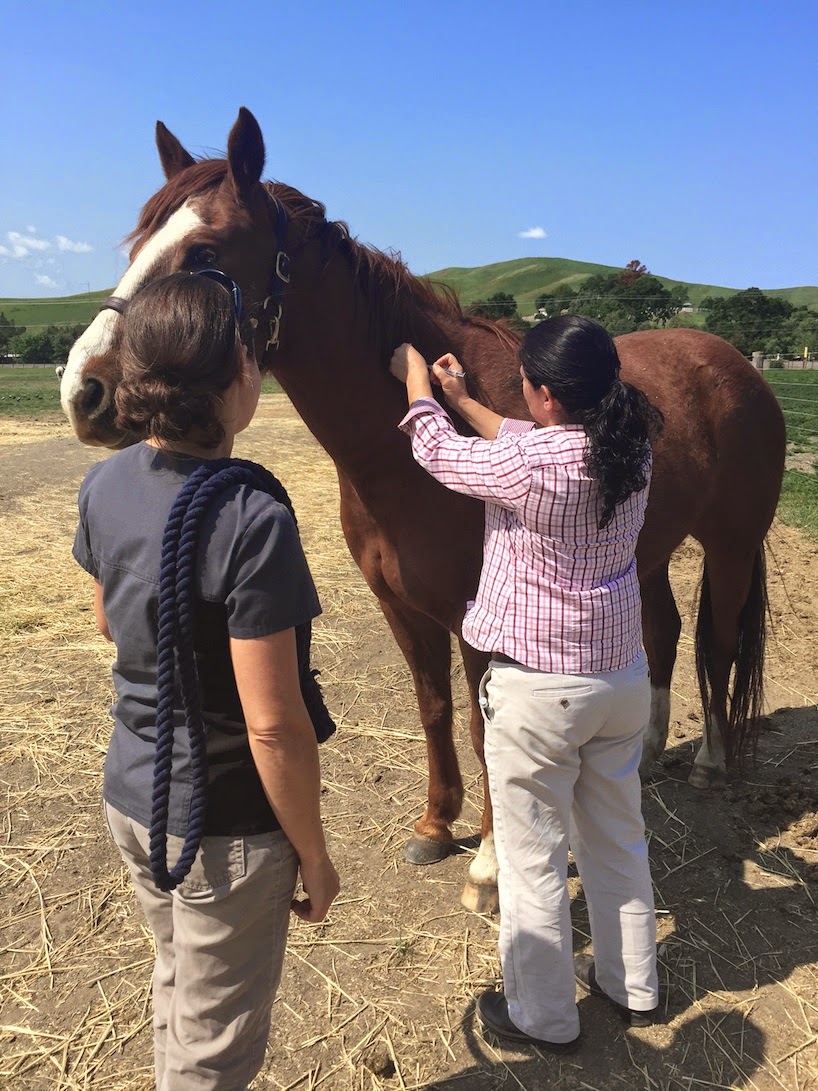 Sharing the full video of Ellie and I jumping last weekend! Hoping to catch a few more fences this week! I particularly enjoyed Emma shouting "tube of fire" at us as we came down the last line!

The envelope containing my invoice from Shiloh West felt slightly heavier this month and I groaned inwardly. I wish I could say that I was surprised to find a notification of board increase, however as this is the third increase in two years, I was left mostly just feeling baffled.

This is the biggest increase so far of $49. It's easier to brush off the $25 here and there but overall this total seems to be reaching beyond the normal cost of inflation. With 40 horses at KMT plus a conservative 50 more throughout the other programs that's an additional $90,000 a year.

I think Shiloh West is a great facility. It's well maintained and the guys run it like a well oiled machine. However what I haven't seen over the past two years are any upgrades- no additional turnouts, no eurosizer, no GGT footing.

Rather than receiving a letter that referenced costs of hay, water, etc as being the reason for the increase, I'd prefer to see a list of things that the team is going to tackle to make the facility better!
I am 100% on board in paying a little bit more to get a little bit more!

So chime in. Have you dealt with board rate increases before? What's the favorite update your property has made with the extra funds?